Higher container shipping capacity on the North Europe to North America trade compared to a year ago amid weaker spot rates on the route has been sparking reactions from carriers.
Hapag-Lloyd recently revealed that the AL1 and the AL4 loops would each blank a sailing from North Europe next week, “due to the low demand caused by the COVID-19 situation.” The AL1 and AL4 are both THE Alliance services and strictly sail between North Europe and North America.
THE Alliance members’ most recent service schedules as of Thursday were showing the AL1 is also scheduled to blank a sailing from North Europe on Nov. 26.

Meanwhile, Mediterranean Shipping Co. (MSC) announced in late September that the temporary suspension of the NEUATL4 loop would be extended until the end of 2020. MSC was operating this service with 2M Alliance member Maersk Line, which has been referring to the loop as the TA4.

The TA4/NEUATL4 strictly sailed between North Europe and North America before it was suspended in Q2 of this year.

Even Orient Overseas Container Line’s (OOCL) revenues from the transatlantic trade in Q3 saw a much more modest year-over-year increase than the carrier did for the transpacific, Asia-Europe and intra-Asia/Australasia trades, according to data revealed by Orient Overseas (International) Ltd. OOCL’s revenues on the transatlantic trade rose 2.4% year-over-year in Q3, while the carrier saw revenues rise 18.4% on the transpacific trade, 25.5% on the Asia-Europe trade, and 11.5% on the intra-Asia/Australasia trade.

Looking at spot rates on the North Europe to North America trade, the latest reading of Drewry’s World Container Index (WCI) on Thursday showed that rates from Rotterdam to New York were clocking in at $2,014 per FEU, down 15% year-over-year, while all the other trades included in the index were seeing higher rates from a year ago.

In terms of capacity, weekly allocated TEUs on the trade as of the end of October stood at 78,780 TEUs, up 4.0% from a year ago and the highest amount since April of this year, as illustrated in the chart below, which was built using BlueWater Reporting’s Capacity Report. 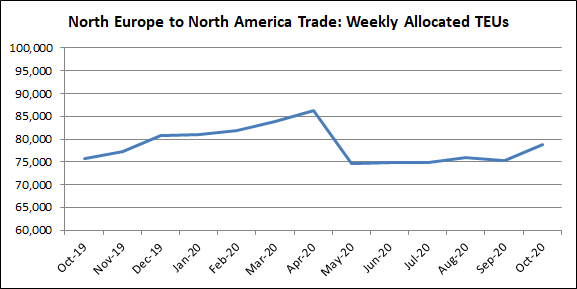 The table below, which was built using the latest reading of BlueWater Reporting’s Carrier Trade Route Deployment Report this week, shows the top five of the 12 carriers that allocate capacity on the North Europe to North America trade. MSC has a strong lead by allocating 20,486 TEUs per week towards the trade, followed by Hapag-Lloyd and Maersk Line.

However, in terms of which carriers have the most at stake from how the supply and demand balance continues to play out on the trade are the smaller carriers of ICL and Eimskip. The table below, built using the latest reading of BlueWater Reporting’s Carrier Trade Route Splits Report this week, illustrates how 33.3% of ICL’s weekly allocated capacity is slated for the North Europe to North America trade, while 17.2% of Eimskip’s weekly allocated capacity is designated for the trade.