Capacity had been growing steadily throughout Q1 and Q2 on the transpacific lane. As the economy of North America recovered following the worse of the coronavirus pandemic, demand for consumer goods soared causing an increase in traffic along the transpacific lane, thus raising the capacity.

The increase in traffic has caused port congestion along the west coast of North America resulting in significant delays in the goods reaching their destination. Hapag-Lloyd released an update this last week, reporting of extreme congestion at all terminals at LAX/LBG and expects the congestion to continue through the summer. Oakland is facing similar delays with a labor shortage impacted congestion further.

Carriers have reacted to these delays in several ways. MSC has changed the weekly call to Oakland to fortnightly on their Maersk-partnered 2M Alliance “Orient” service, with the first omission planned for August 7. MSC also announced a new service which commenced last month, their “Liberty” service, with the aim to redirect a portion of their transpacific network towards the East Coast with fast transit times to help alleviate the congestion at the ports. 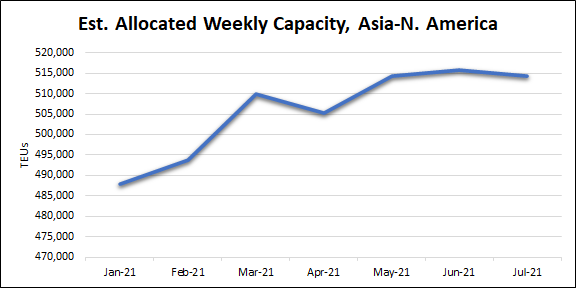 The capacity along the transpacific trade lane has seen a great increase in the first quarter of 2021, according to the above chart with the data derived from BlueWater Reporting’s Capacity Report. From the last week of January to the last week of March, the estimated allocated weekly TEUs grew by 4.5 percent from 487,964 TEUs to 509,808 TEUs.

The last week of April saw a slight drop in capacity from the previous month at 505,198 TEUs. The capacity then rose again where it has been relatively stable since the last week of May to the current week in July, which is currently at 514,342 estimated allocated weekly TEUs. This indicates that the continual growth of capacity on the transpacific route since January has been stabilizing. 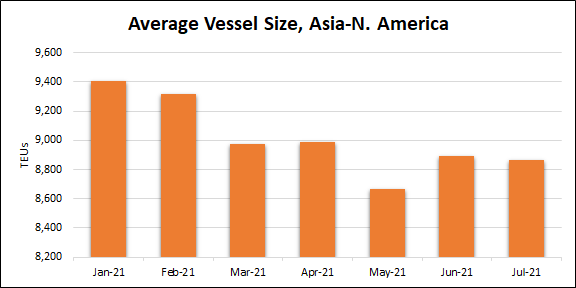