As the North American economies continue to recover and consumer demands remain booming, container volumes have reached all-time highs for ports along both coasts.

Along the East and Gulf coasts, volumes have been increasing throughout the year. The Virginia Port Authority reported last week that the Port of Norfolk had broken a monthly TEU volume record with the port handling 286,405 TEUs, a 38.2% increase from April of 2020. This comes after a surge of cargo following the delays caused by the Suez blockage.

In the middle of May, the CMA CGM Marco Polo, the largest vessel to ever call the region, reached several ports on the East Coast. The vessel has a capacity of 16,020 TEUs and calls the ports of Halifax, New York, Norfolk, Savannah and Charleston along the Asia to ECNA portion of OCEAN Alliance’s Columbus JAX service.

The West Coast of North America also continues to see increased traffic at the ports leading to record-breaking volumes amidst the unprecedented delays.

The Port of Los Angeles reported earlier this month that April volumes reached 946,966 TEUs, a 42% increase from April 2020. Of those volumes, 490,127 TEUs were imports, 114,449 TEUs were exported, a 12% decline from the previous year. Empty containers handled in Los Angeles reached 342,391 TEUs in April, an 82% increase from the previous year, which means around 36% of all containers handled at the port were empty. 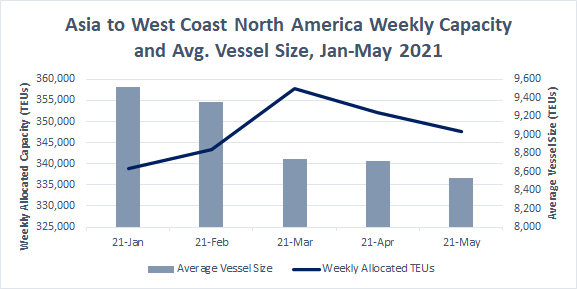 According to BlueWater Reporting’s Capacity Report, the West Coast of North America saw an increase in estimated weekly allocated capacity from the last week of January to the last week of March, 338,768 TEUs to 357,818 TEUs, but has reduced slightly as of the latest week of May to 347,687 TEUs, a 2.6% increase since January.

The average vessel size has steadily been on the decline since the end of January, from 9,518 TEUs to 8,530 TEUs in May. This reflects a shift towards smaller dedicated services connecting Asia and the west coast, including the new Wan Hai and MSC services calling the NWSA ports. 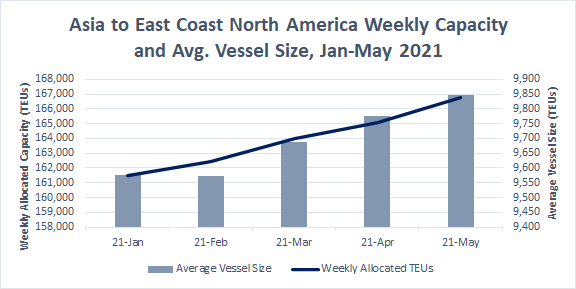 The Capacity Report from Asia to the East and Gulf coasts of North America shows an increase in both weekly allocated capacity and average vessel size.

The average vessel size has been significantly increasing throughout 2021, from 9,575 TEUs in January to 9,847 TEUs in May. This makes the average vessel size currently servicing the East Coast from Asia 15.4% larger than vessel servicing the West Coast. This, along with the arrival of the 16,020 TEU CMA CGM Marco Polo shows the container handling capabilities of the ports along the Gulf and East Coasts is catching up to that of the West Coast in terms of vessel sizes.