The Asia-Europe trade route has seen an unprecedented level of demand over the past few months following the rebounding of economies from the COVID-19 pandemic. Despite the few difficulties arisen from this demand, capacity remains strong and continues to increase.

The rising demand, along with the Suez Canal blockage in March, has caused a worldwide shortage of available containers. As a result, container spot rates continue to grow to unforeseen heights, as the Freightos Baltic Index (FBX) shows with spot rates of $11,858 from China/East Asia to North Europe and $11,633 to the Mediterranean, as of July 1, 2021.

Congestion at ports, both in China and Europe, are also causing issues for shippers. Hapag-Lloyd announced they are terminating calls at Rotterdam on their FE4 service for seven weeks and are experiencing delays at Yantian due to the Shenzhen area’s recent COVID outbreak. 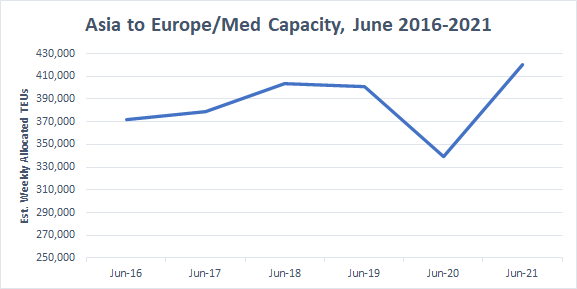 Despite the issues raised above, capacity along the Asia to Europe and Mediterranean trade routes have risen since this time last year. According to BlueWater Reporting’s Capacity Report, the estimated weekly allocated capacity in TEUs rose from 339,283 during the last week of June 2020 to 420,587 during the same period this year, an 81,304 TEU or 24 percent increase. The week of this past June’s capacity was greater than the two previous high capacity weeks of 403,183 TEUs and 401,091 TEUs in 2018 and 2019, respectively. 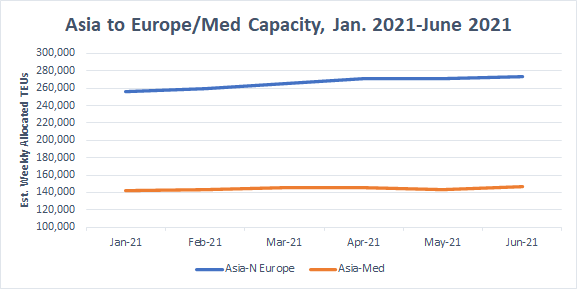